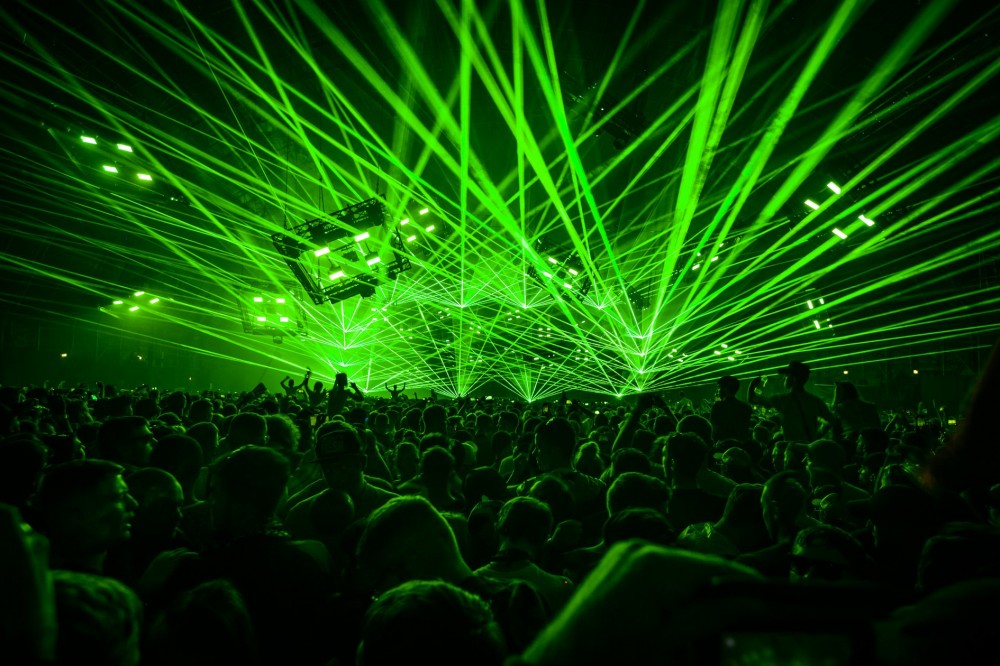 While the stages are slowly being deconstructed and the massive crowds have returned home, those that attended Creamfields will forever hold the four-day event in their memories. The weather wasn’t ideal at moments, but it did not hold us back from enjoying our favorite acts. Those that could not attend and were watching the live-stream may have saved themselves from treading through mud, but missed the opportunities to make new friends with people who traveled from all corners the world. To be honest, it caught me f guard on how friendly and respectful people, including security and staff were to one another. I didn’t see any shoving or fights like events I have been to in the United States. This was a relief to me since I was traveling alone, to spark conversations with people while standing five hours to wait for Eric Prydz’s HOLO set for example. While waiting in line for food, I asked a group guys behind me what their favorite part the festival was.  They explained how they all came alone and met while camping near one another at last year’s Creamfields and decided to come back this year as a group. One them said that “anyone coming alone to Creamfields, would really have to try hard not to talk and meet new friends.”

This was my first-time camping at a music festival that spanned multiple days. I chose to stay in the Dreamfields location Creamfields fered and was thoroughly impressed with the quality and attention to detail. Having a place to charge your devices and warm-up in between acts is a must to make it through 4 days. When it came to food, Creamfields had anything and everything you could desire including Pizza, Mexican food, desserts, Chinese food… Now, the stages. It’s impossible for me to pick one stage as the best, but it would have to be between Steel Yard, Generator, and Arc. Generator made its first appearance this year and was fantastic both visually and sound wise for top acts like Armin van Buuren, Steve Angello, and Above and Beyond. Speaking top acts, I would now like to give my two favorite acts the weekend and why they stood out from the rest.

Axwell Λ Ingrosso closed the Arc stage Saturday night and did not go short on lasers, fire, and fireworks. The Swedish duo started their set with their epic new ID “Behold” that Axwell stated in a recent interview would be released soon. Soon after, they played some old classics like Barricade, Dark River, Dream Bigger, along with some new hits from Magnificence including Fire, and Out My Mind. We all enjoyed hearing our favorites like More Thank You Know, On My Way, Sun is Shinning, Don’t You Worry Child, and course One. The party really came to life when Antidote dropped, lighting up the crowd and night sky with flames (First Picture Above). Arc immerses the crowd perfectly, surrounding you with flames above the set and huge LED panels that showcased vivid illustrations. Everyone around me was hoping Steve Angello would make a surprise appearance but instead, when Axwell Λ Ingrosso’s set came to an end, three white dots appeared on the screen, replacing their usual Λ logo. When Axwell yelled, “To be continued”, myself and everyone around me immediately thought that Swedish House Mafia would be coming back later in the festival. Overall, this might have been the last time Axwell Λ Ingrosso performed at Creamfields as a duo, but they put together an amazing set with new music and refreshing visual effects for those that have seen them multiple times like myself. Everyone needs to see a set by these two at least once in their lives. We can all hope that next year at Creamfields, Swedish House Mafia will be hitting the Arc stage once again.

In my opinion, Eric Prydz’s HOLO set was a no brainer when deciding which artist “won” Creamfields 2018. For most us at Creamfields this year, Sunday was a waiting game till Prydz came on stage at 9pm. Two hours before Eric was set to begin, Steel Yard was packed, each the entrances/exits were overflowing with people. By 9pm, the inside Steel Yard felt like a sauna and all us were packed together like sardines. Nonetheless, it was entirely worth it and exceeded all my expectations. The two-hour set began with Prydz showing f his hologram technology for the first time with a cube stretching over the crowd. I tried my best before the festival to not watch any videos his previous HOLO shows but from what I did watch, it did not compare to seeing it live. Steel Yard was the perfect venue for his HOLO show, taking advantage about 20 hanging/moving contraptions that made you feel like you were in outer space. His set included popular tracks like Stay With Me, Every Day, Pjanoo, and course ending with Opus. The visuals were like nothing I have ever seen and raise the bar in every aspect. Eric Prydz made it possible to have a floating astronaut, satellite, and DNA strip come alive over an audience. If you ever have the chance to see HOLO, I highly recommend it, even if you’re not familiar with the music. I can’t wait to see what Eric comes up with next, but he has no doubt outdone himself with HOLO.

I would like to thank Creamfields, especially everyone both behind the scenes and working day and night to keep everything running. You can tell it takes a massive crew to build and maintain the stages and grounds with everything going on. The weather did not dampen the event, no matter how muddy or wet it got. Staff did their best, constantly laying down hay and wood chips on the walking paths. The Kaleidoscope Orchestra was also a special treat Saturday afternoon with an emotional tribute to Avicii, something we all appreciated. Everyone should experience the energy that Creamfields has at least once in their lives, and I hope to make it back again soon. In conclusion, I would like to give a big thank you to EDMTunes for the opportunity to cover Creamfields this year!

Stay tuned for the ficial Creamfields 2018 Aftermovie and check out an upcoming event by Creamfields here!