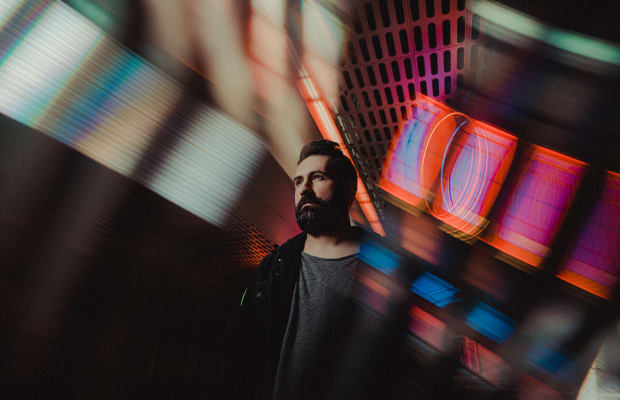 Electronic music producer and guitarist Jake Bowen has dropped another crumb from his anticipated sophomore album, a mesmeric cut featuring Elliot Coleman called "I Am Error."

"I Am Error" is a long time coming for Coleman and Bowen, who have known each other for 14 years but have never actually collaborated on an official release. The chemistry is palpable in this hypnotic slice of indietronica, which finds the former crooning over the latter's woozy, acoustic-driven production. Elements of lo-fi slither through an absorbing arrangement here as the nuances of Bowen's sound design ebb and flow between crisp, spacey claps.

Coleman's brooding lyrics in "I Am Error" explore loneliness and isolation—motifs we can all relate to as we trudge through the throes of the pandemic. Check out the single, which arrives by way of 3DOT Recordings, below.

"I Am Error" will appear on Bowen's forthcoming The Daily Sun album, due out on October 1st. It slides in next two two singles: the airy "Say Nothing" (featuring Abbi Press) and the record's titular track, a spellbinding instrumental jam rife with fluttery arpeggios.

The Daily Sun will be pressed on vinyl and Bowen will be limiting the run to 300 copies, which can be purchased here.

Hailing from New York, Bowen cut his teeth in the Grammy-nominated progressive metal band Periphery, whose 2010 self-titled debut album helped popularize djent music. In addition to releasing electronic music under his own name, he also produces and releases tracks as Four Seconds Ago, a nom de plume he operates in collaboration with Periphery bandmate Misha Mansoor.

You can watch Bowen and Coleman wax poetic about the origins of "I Am Error" in a recent Twitch stream here.