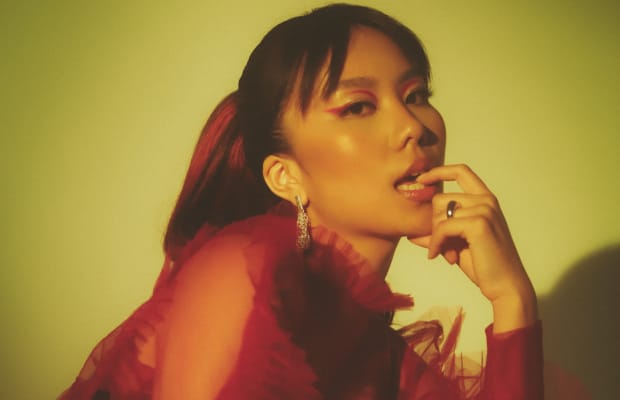 While you might think you know JVNA, one of the most promising young producers in the electronic music space, you've never heard her like on Hope In Chaos, her bombshell debut album. Fittingly, the record was self-sung, written and produced.

Out November 19th via Violet Arrow, Hope In Chaos is a melodic bass masterpiece, tapping into the 22-year-old at her deepest and darkest for an aural journey of epic emotional proportions. 12 tracks carry us through a transformative coming-of-age opus with impressive momentum, narrated by lyrical brilliance à la Taylor Swift and Halsey.

Opening single "Chaos (Prelude)," for example, thunders along with an orchestra of drums and strings. "Total spiral in my mind...searching for an unknown sign," JVNA riffs with an impassioned grit.

Then there's "18," which chronicles her transition to womanhood and ponders the impact of beauty standards. "Where You Are" explores a longing for lost love, while "At Least It Was Fun" handles the conflicting emotions that follow a breakup.

Even deeper are the album's transition songs, like "Hope" and "Fly," which mirror JVNA's grapple with grief as a teen. She tragically lost her father in 2016. Tracks like these are a rarity in bass music—no cliché love songs here.

Sprinkled throughout Hope In Chaos are sublime, tender piano riffs, speaking to her training as a classical musician and pianist. They're also paired with pop-rock influences and moody synths. Together, these sonics translate JVNA's stories in new ways, representing both a cathartic healing process and the darker, lingering impacts of her hurdles.

EDM.com chatted with JVNA ahead of her debut album release to get the inside scoop on Hope In Chaos and discuss its inspirations, as well as the song she's most excited to perform live. You can also catch Hope In Chaos live on JVNA's upcoming tour, which kicks off February 19th, 2022 in Honolulu.

EDM.com: When you set out on making this album, what goals did you have? What journey did you want to guide listeners through?

JVNA: The overall theme of this album is about the story of Pandora’s Box. The Greek tale follows the goddess Pandora, who opens a forbidden box out of her own curiosity, thus unleashing chaos, diseases, and sins into the universe. The one thing that was left behind was hope. This album is about reaching into the unknown, fighting chaos against all odds, and seeing the light at the end of the tunnel.

This album was written about a time of instability where I was going through so many rapid changes at once: breakups, the death of my father, graduating from college, entering the entertainment industry. I’m now at a pretty mentally stable part of my life and, in a way, writing this album was my way of processing my journey to adulthood.

EDM.com: Did you ever feel any pressure to make it sound or feel a certain way, considering it's your first album? If so, how did you get out of that mindset and reconnect to your own truth?

JVNA: It became a journey of discovering myself and my sound. I think I struggle a lot from mansplaining. People like to tell me how to mix my songs, how to write my lyrics, and what will “sell” to the EDM crowd. But I realized that I chose to do music with my life because I wanted to do whatever I wanted with art. I would rather pursue a 9-5 job than do music under other people’s control. I wrote this entire album with no one navigating me as a statement of writing from authenticity.

EDM.com: You can really hear the different genres that influenced this project. What artists or sounds were you listening to or studying while you were creating it?

JVNA: I think my core influences in music come from listening to evanescence and anime soundtracks. Hiroyuki Sawano is one of my favorite Japanese anime composers and his style really grew on me when I listened to him when I was younger. I also started listening to James Blake during this time period. He’s got a really complex harmonic style in his tracks which were really inspiring to listen to get some new melodic ideas.

EDM.com: What do you think you learned through this album creation process?

JVNA: I learned that there is no right way to write music or mix a song. As long as it sounds good to you and you feel authentic and proud of it, then it is the right song. I struggled with hearing so many opinions on how to change my music that it drove me insane. But the moment I said, "Eff this. I’m going to write with no rules on how things should sound," my creativity flowed. I learned to follow my vision with this album and gained a lot more confidence in my own opinions.

EDM.com: How do you think your identity as a woman plays a role in your art, as well as in your ability to write so candidly? Are there any female songwriters you look up to or try to channel?

JVNA: As of now, there aren’t that many female electronic producers who make electronic melodic bass/pop. I always try to write music and tell stories in the EDM scene through a female voice and perspective.

The song that has the most emotion behind it is probably my song “18.” This song is about the dangerous box of impurities that come with turning 18. You are immediately legally able to be sexualized by others. My lyric "Will you cut your face just to be pretty?" is about the plastic surgery industry and the unrealistic beauty standards that many young women like myself have wanted to attain. "You say I want to be naughty" is a really direct line about the cringe messages I’ve gotten in my DMs as a high-schooler from older men. It is an overall song about how I felt transitioning into adulthood as a woman and also a turning point in the album.

I’m very inspired by Halsey. She’s extremely candid and outspoken about her experiences and I think that's what makes her art so true and relatable.

EDM.com: Is there a song in particular that you're excited to perform live?

JVNA: “Dystopia.” This is one of my favorite songs on the album that didn’t become a single. It's dear to me because it is a song about how I process and deal with online negativity, the news and social media in general. It is a feeling we all can relate to, whether it’s comparing yourself to a photo of someone perfectly photoshopped or seeing the media in utter chaos. At the end of the day, each of us are beautiful in our own way and it is important to remember to love ourselves.

EDM.com: Considering this project was inspired by some of your most life-altering moments—loss, love, perseverance, et cetera—what advice do you have for listeners who might be going through similar experiences?

JVNA: Stay strong, you got this! Whatever hardship you may be going through may be hard to bear right now, but if you keep going, you will see a light at the end of the tunnel soon enough.