On September 7, 2020, Amnesia Ibiza will celebrate the 20th anniversary of Kevin & Perry's release with a one-off film screening and follow-on rave.

The film will last from 10pm - 12am; the party will kick off from midnight and wrap up at 6am.

Read this next: The best tracks of the 2019 Ibiza Season


Fontaine explains, “Every time I watch it gives me goose-bumps. Working with them on the club scenes was fantastic and it was actually me djing with Kevin and Perry on fake decks. One of those nights you just never forget and I can’t wait for the 20th Anniversary celebrations back at Amnesia Ibiza this summer.”

Judge Jules chimes in, “What’s astonished me about Kevin and Perry is that its appeal spans the generations. Each track from its soundtrack is familiar to everyone between the age of 13 and 50. Having been involved in the movie’s soundtrack, and having been in Ibiza when it was filmed 20 years ago, I could never have imagined that Kevin and Perry would have such enduring musical and cultural significance."

Jules continues, "There have been a number of films covering Ibiza club culture, but none has come close to Kevin and Perry, in terms of its everlasting popularity. Going back to where it all started for the 20th Anniversary in Amnesia will be a special occasion indeed.”

You can grab tickets for the event here. Check out the flyer below. 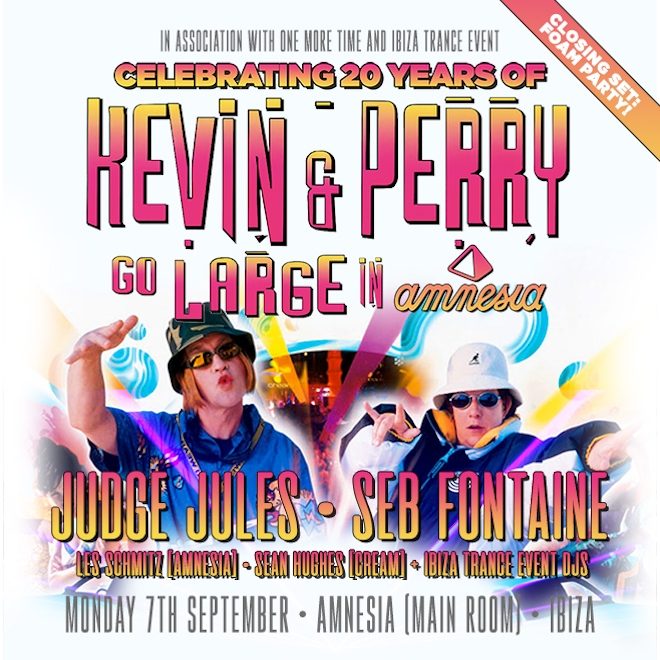