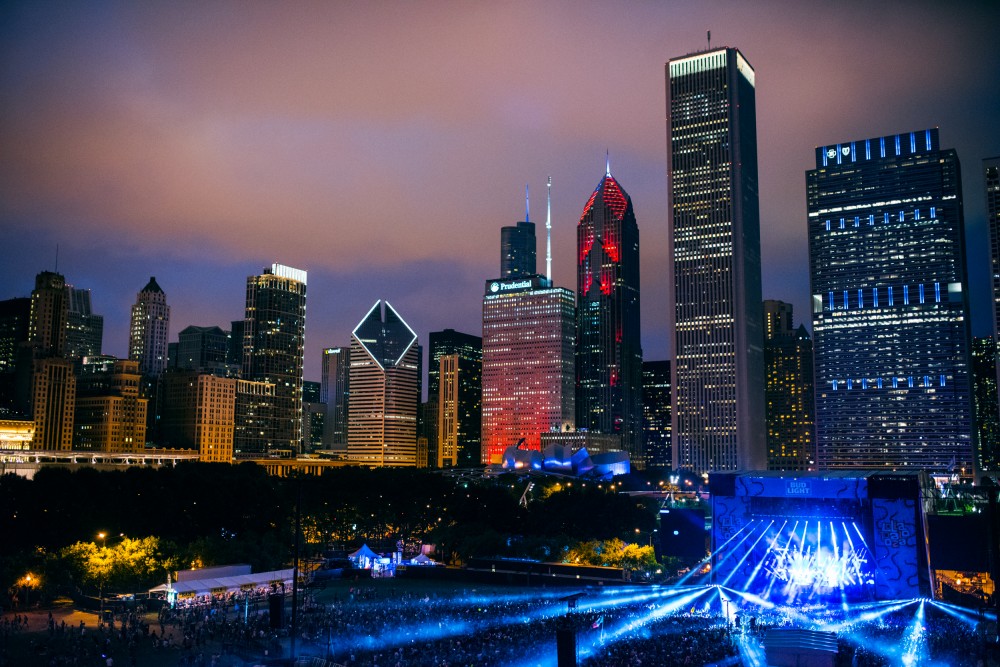 For the eighth year in a row, I strolled into an all too familiar Lollapalooza at Chicago’s own Grant Park. As in years past, I found myself immediately met with groups festival goers adorned in the staple Tune Squad jersey and all too many crop tops to count. Mutterings lobster corndogs ran rampant, and I felt right back at home amongst the hustle and bustle Lollapalooza’s 100,000 attendees.

Grant Park was alive with music, pop-up installations, and course, more people than I’d ever like to be around on a daily basis. The three-day festival turned four (a treat for their 25th anniversary which stuck on for the following years), is something I ten treat as a marathon, and not a sprint, as I quickly noticed some teenagers neglected f the bat.

Day one kicked f with performances from the likes Cuco, Basement, 4B, All Time Low, and more. Music up-and-comers as well as industry staples took to stages all throughout Grant Park to put on their best shows to crowds sweating to death under a cloudless sky. Artists like Billie Eilish and All Time Low played to masses on stages far too small for their crazy crowd sizes. Nonetheless, the people partied on throughout the afternoon and made do with the small spaces they were given.

Thursday evening saw performances from Jaden Smith, LANY, Petit Biscuit, Kayzo, and REZZ. Kayzo surprised the crowd at Perry’s by bringing out Jacoby (LAST NAME INSERT) Papa Roach to perform (WHAT THE F IS THE NAME OF THE SONG) to a confused crowd young people looking for only the sickest drops and moshable beats. REZZ followed up with her signature nefarious sounds, and debuted new tracks from her recently released album A Certain Kind Magic, which dropped at midnight after her Lollapalooza performance. Perry’s was alive as ever, packed to the brim with shoving teenagers and only the loudest bass. Thursday night headliners included Galantis, Arctic Monkeys, Tycho, and Travis Scott. Rock has been a lost genre at Lollapalooza for years now, and it showed during Arctic Monkeys headlining set. The Grant Park stage which hosted Arctic Monkeys paled in comparison to the opposing Bud Light stage, where thousands and thousands gathered for Travis Scott. I’d say Travis Scott drew about five times the amount people that Arctic Monkeys did. After eight years watching the crowds get younger and younger, I have to admit that rock is losing traction at a festival which once only included rock artists. Sigh.

After a shortened set (and fairly awkward proposal), I left Travis Scott excited for day two.

Friday saw performances from exciting electronic acts early in the day like Noizu, KUURO, and Goldfish. Equally as exciting, Clairo and Post Animal killed their respective sets early on in the day. Lido, Tyler The Creator, Lauv, Big Wild, and The Neighbourhood saw large crowds, with Tyler, The Creator’s 4:30 set drawing the masses to the Grant Park stage early on in the evening. After a lobster corndog and a water refill, I headed over to the tree-covered American Eagle stage to see none other than Greta Van Fleet, the skyrocketing 21st century rockstars. Drawing a massive crowd all ages, Greta Van Fleet’s performance was not only pure and soulful, but refreshing amongst a festival that has become driven by Top 40 artists and large rappers. I thought GVF drew a big crowd until I headed to Bud Light to catch the end Post Malone, who seemed to draw one the largest crowds the weekend. Crooning vocals from Post were met with screaming lyrics from fans, and all a sudden I was stuck in a bottlenecked sea thousands trying to make their way to Bruno Mars.

The hike from Post Malone to Bruno Mars was a trek through a drunken forest sloppy teenagers and tired festival goers. After what seemed like ages, my pilgrimage from Post to Mars came to a relief-filled end. I almost thought I wouldn’t make it. I arrived at the Grant Park stage to be greeted by a crowd all types: high schoolers, young adults, and moms were spilling out into the paths surrounding the stage. My mom even came with for the day to see some 24K Magic. I mean, who isn’t a sucker for Bruno Mars?

Bruno’s set was chock-full fan favorites and Bruno classics from “Finesse” to “24K Magic” to “Marry You.” A true pop performer at his finest, Bruno Mars put on one my favorite Lollapalooza sets in recent memory. I left the park Friday night with a big stupid smile on my face.

Saturday kicked f with the need to bandage up my left foot and wishing away the 97 degree weather I would soon be greeted with upon leaving my apartment. It was hot. It was so hot.

Early in the day, lovelytheband, Wallows, BROHUG, and Sir Sly took the stage as I slowly melted into the ground under my badly bruised feet. Some odd hours later, I found myself awkwardly standing on the edge the Tito’s Handmade Vodka stage to see none other than SoundCloud’s finest, Lil Pump, adorned in a sweater in the anything but mild Chicago weather. After a hype-man spent far too long on the hype, Lil Pump took the stage to play a whopping three songs before getting cut f. The crowd was shoving incessantly, and though Pump tried to get them to stop, security cut it f. People were dropping like flies. Maybe it was the heat, maybe it was the BAC level 0.30 in some people, but attendees were fainting left and right. It seemed to be for the best.

It was time for another round headliners, and I made my way to the Bud Light stage to see Vampire Weekend, an absolute favorite mine who hasn’t toured in four-some odd years. Lollapalooza was their first festival performance since their touring hiatus.

I arrived at the stage just as Vampire Weekend kicked things f with their signature A-Punk, and I waltzed right up to the middle front with ease. It seemed as if entire Lolla population was at The Weeknd. I wasn’t mad about it.

Two more A-Punk’s later and a mass Vampire Weekend classics, Ezra Koenig announced that their new album is done, and played some new music to the crowd from his phone. Expecting nothing less from Ezra, I laughed, sang along some more, and left at the nights end, hopeful I’d survive day four.

Another scorching Sunday, I was deep into my fourth High Brew cfee, and decided to embark on my journey to see Rex Orange County. For 1:50pm on the last day, Rex drew a massive crowd and thousands fans who passionately sang back each word his songs. His Lollapalooza debut was massive, and was one my favorite sets the weekend. I vote that he’ll be back and headlining one day soon.

Herobust, Rainbow Kitten Surprise, TroyBoi, What So Not, Lil Uzi Vert and Medasin rounded out the rest the evening, and I finished my eighth Lollapalooza with a bit Jack White and a bit ODESZA. Like Arctic Monkeys and Vampire Weekend, Jack White saw a sparse crowd compared to ODESZA. Nonetheless, both artists performed fantastic sets littered with fan favorites. And just like that, four days Lollapalooza came to a close.

Top 40 acts and A-list rappers dominated Lollapalooza 2018, and crowd sizes prove it. Travis Scott, Bruno Mars, The Weeknd, and ODESZA saw the bulk the attendees during their headlining slots, with massive rockers like Jack White, Vampire Weekend and Arctic Monkeys getting the short end the stick. For a festival that was once so rock-centric, Lollapalooza seems to have shifted to cater to a younger, more pop and rap leaning crowd. Though there’s nothing inherently wrong with that, it seems that Lollapalooza needs to find its footing in the festival world and decide exactly what kind festival it wants to be.

At any rate, I’m a sucker for my hometown festival. An absolutely stunning setting, Grant Park sits in the middle the city, surrounded by beautiful lit up buildings and amazing greenery. Lollapalooza brings a special kind light to Chicago, and though I can’t quite put my finger on exactly what it is, something always brings me back to this festival, all the walking, sweating, and lobster corndogs.

Until next time, Grant Park.