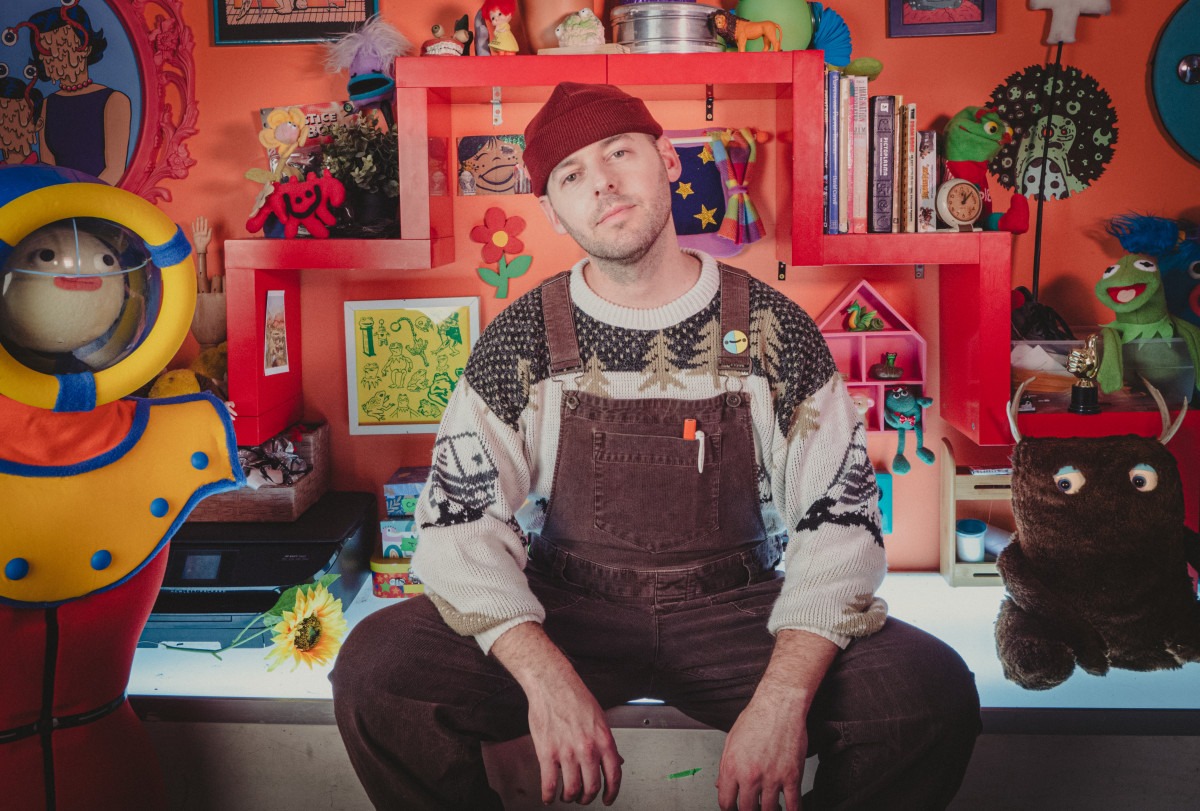 Using new technology to explore the world during a time of forced isolation, Swardy delves into the complexities of what makes us unique on his new album, Compact Objects.

A passionate traveler finding himself sidelined due to the ongoing pandemic, Swardy dove headfirst into 3D animation to cultivate new opportunities for adventure. With no experience under his belt, he downloaded the popular animation toolset Blender and began a two-year journey that would eventually culminate in Compact Objects.

We caught up with Swardy to explore what went into the development of his visceral audiovisual album.

Beginning work in March 2020, Swardy set out to create a dreamlike journey for his endearing mascot, Morne Diablotins. Sharing a name with the tallest mountain in Dominica, he found inspiration from visiting the beautiful country on a service trip in his youth.

With a name that translates to "dreary imp," the star of the short starts off in front of the TV, barely keeping himself awake as the programs play on. He then stumbles into unexplainable, lush worlds beyond our dimension, for the delightfully absurd adventure that is Compact Objects.

Finding himself inside a psychedelic room that seems to exist outside space and time, Morne Diablotins becomes compelled to look into a staticky TV. After staring at his own reflection, he jumps into the portal and falls into a pixelated, electronic world.

The screen then fades to black and he wakes up and walks through an illusory world before the camera zooms out to reveal that his trail is actually a giant wheel propelling him through a body of water. After journeying long into the night, our bewildered star is flung headlong into an out-of-body experience, where he stumbles his way through a fanciful labyrinth alongside a vibrant, humanoid figure.

Lying on his back as the world spirals around him, an alarm clock beeps, and he awakens on his couch in front of the TV once again. Following a brief moment of confusion, he makes the decision to snooze his alarm clock and re-enter the dreamworld. The final scene features a dance party that sees Morne boogying down to the sounds of the album's titular track with the otherworldly companions he met on his trip.

For those curious about the creation of the animation, Swardy shared a commentary video explaining how he made one of the scenes.

A self-proclaimed "noob," Swardy says the process of creating visual art felt like making-music to him. Starting out small, the video was supposed to be a quick little dip into the animation pool, but he found himself well into the deep end as Compact Objects unraveled into a 10-minute short that inspired the full-length album.

He explained that he typically doesn't like to share any of his work until it's entirely polished and complete, but for this project, he wanted to put himself out there. All of his beginner mistakes are on display in the video, he added.

Citing help from his talented friends and family and also a group of producers taking part in a song-a-day challenge, Swardy pushed himself to soundtrack the animation with new musical offerings. Utilizing a holistic approach, he spends a lot of time shuffling through ideas and drafting up plans before he brings them to life. This approach is on full display not only in Compact Objects, but all of his projects, which are so meticulously crafted that every single element feels true to his unique style.

With its blend of angelic vocals and whimsical keys, "A Boat Shaped Leaf" functions as a warm hug before listeners are sent off on an expedition that Swardy has designed to cover the entire emotional spectrum. In the first few seconds of each track, they'll find themselves transported to a new destination, hand-picked by the musical tour guide.

"Cold Man" and its brassy infusions pair well with the choppy vocal samples as a steady beat invokes feelings of watching icy rain patter on a window in the night. Bringing in the morning sun over the lake, "In Her Element" uses elements of biomusic to foster a tranquil atmosphere inspired by Swardy's spry grandmother who, despite being in her 90s, still drives a motorboat.

Inspired by the astrological classification of compact objects like black holes and neutron stars (the densest objects in the universe), the titular track, "Compact Objects," explores the curious concept of what makes us human. "You my friend, are doing the thing again, you're holding it in but then crushing it too damn dense to understand," he croons in an effort to underscore the need as humans to never lose sight of the beauty around us.

Swardy explains that while humans are complex, he doesn't believe we are random. Everyone can be explained as a summation of their experiences and beyond. By understanding these building blocks, we can better empathize with those around us and explain why we do the things we do.

"The term 'compact objects' describes the most dense and massive celestial objects in the known universe," Swardy tells EDM.com. "What I've been writing about, however, is the complexity of a human character. I see how people are not arbitrary or novel, but rather interpretable. Our influences are complex and abundant, but we are becoming their summation every day. Tragedy, media, friends, accolades, regrets, and adventures, then, aren't just what we experience, but who we are."

Spending some time in Columbia, Swardy recorded the sound of crosswalks in Medellín to serve as a metronome of sorts. This led to "Medellin Crosswalk Boop," a track with tender production that evokes feelings of bittersweet nostalgia.

Turning up the energy a bit, "Morne Diablotins' teleports you right into the middle of a colorful dancefloor. With a setting seemingly plucked out from Swardy's jaw-dropping performance at Porter Robinson's virtual Secret Sky festival, you can close your eyes and imagine yourself dancing along with the lovable mascot's puppet friends.

Using recordings of frogs in Columbia, "Frog Politics" serves as an imaginative skit that sets up the final, two-part track, "You Belong // Built Myself." Inspired entirely by the visual art he created, the first half transforms from a sepia-toned, yet breezy downtempo track to a prismatic, futuristic romp about finding inspiration in personal growth.

All in all, Compact Objects is one of the most polished and thoughtful releases of the year, and a masterful audiovisual opus that showcases the work of a true aesthete. While so many releases nowadays feel uninspired and one-dimensional, it's refreshing to experience something that has so much heart. It's near impossible to listen to any of the eight tracks and not be overcome with raw emotion.

Listen to Compact Objects below and find the album on streaming platforms here.