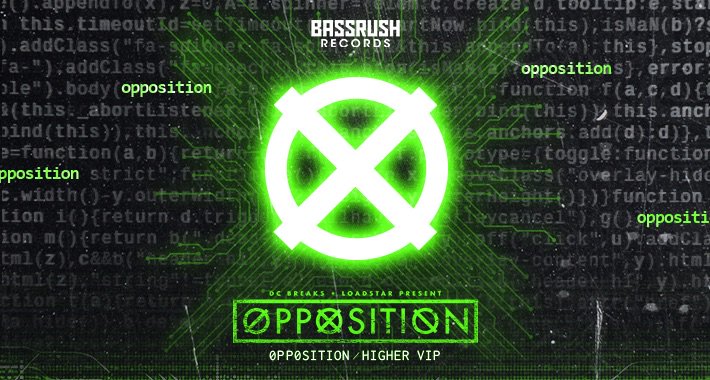 What do you get when you merge two the most legendary acts in drum and bass, err…. music in general into a supergroup? I’ll give you a hint. It’s Opposition.

Featuring the masterful sounds the collaborative efforts  DC Breaks & Loadstar, they’ve created a monumental sound and act that are a force to be reckoned with. Mining the best aspects both their individual musical endeavors and consolidating them into a collective masterpiece, everyone needs to know about this fresh new act. Out now on Bassrush Records.

The debut release under OPPOSITION has been highly-awaited and has been kept under wraps for a long time. How long has this “super group” type project been underway?

A long time actually! It all started when we did a back to back at Rampage in Belgium in together. This was February 2017(!) After that lots promoters were hitting us up for shows so we thought we’d make a tune. One turned into 4 and before we knew it we had half an album written. Since then we’ve made a few more tunes and done loads shows across Australia, Europe, Russia and North America. The plan was to keep the tunes just for ourselves but now they’ve been kicking around a long time we felt the time was right to start releasing some the material.

The tunes have been played out worldwide by artists from all over the map. What are your collective goals with OPPOSITION? Will you be touring under OPPOSITION in the foreseeable future?

Opposition was always just about making tunes we probably wouldn’t have made as just DC Breaks or Loadstar. The DnB landscape changes pretty quickly but fans ten expect you to write in a certain style so having an output for other stuff is really good. I’m not sure either our core fans would have expected us to write something like ‘Opposition’. Touring, yes absolutely, we get over to the US for shows together a few times a year and we’ll be out and about around Europe and the UK too.

Who are your influences in the studio? Does anyone immediately come to mind?

I think we all take inspiration from lots different places, ten outside DnB and also from each other. The way we’ve done the project so far is just writing lots quick ideas, pinging them back and forth between all us and then seeing which ones we like and going and finishing them. Having 4 artists’ ideas to work on is pretty fun and keeps you on your toes.

Are there any new artists that are killing the it lately? Whoʼs fresh and new youʼve had your eyes on?

What is a regular studio session with you guys like?

Because we all live in different places we’ve done the majority the project at our own studios and just made a Dropbox folder all the tunes and projects that we all add to. One us will upload an idea and someone else will say ‘I’ve got an idea for that’ and then they’ll work on it some more and eventually we end up with something we all like.

Any sort studio rituals you all prepare with before attacking a collaboration?

Not really, but we find writing lots fun deals quickly (like half a day or a day’s work max) and then picking the bet tunes to finish is the best way forward. Finishing DnB tracks is what takes the time so you might as well be 100% on the idea before you spend ages finishing it. There’s no point polishing a turd!

Lastly, any last words for your fans at Your EDM?

Keep a look out for some new DC Breaks and Loadstar collab and solo bits coming out in the next few months and we’ll see you all on the road soooooon. Peace!