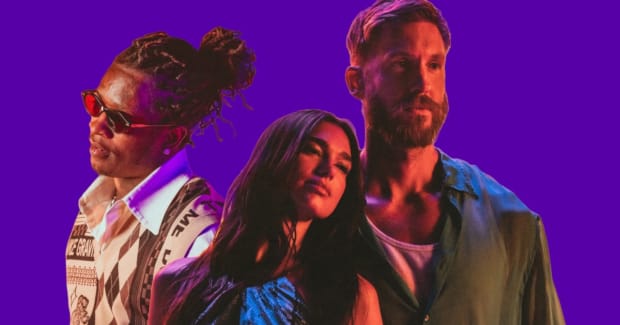 Calvin Harris eagerly tried to warn us about Funk Wav Bounces Vol. 2. Aside from calling it the "maddest album" he's ever assembled, details were few and far between as to when we could expect to hear it, and who else would be included.

That all changed last week, however, when Harris dropped a teaser of epic proportions, revealing the project's lead single "Potion" alongside Dua Lipa and Young Thug.

Harris and Lipa previously made magic in the studio with the alluring "One Kiss," a track that has since gone on to amass over 1.3 billion streams while solidifying itself among the most successful tracks on Spotify of all-time. Incidentally, "One Kiss" was also released in 2017, the same year Harris debuted the wildly successful Funk Wav Bounces Vol. 1.

It's been five years, but Harris hasn't missed a beat in capturing the spirit of what makes the Funk Wav Bounces series stand out. The delicate concoction melds uplifting hip-hop lyricism with euphoric electronic instrumentation and memorable pop choruses in an inimitable manner.

True to its name, "Potion" boasts each of these qualities in spades, including a flashy verse from Young Thug, a memorable hook from Dua Lipa and the distinctly sultry production backdrop driven by pulsing, filtered strings.

If you were counting on Calvin Harris dominating the summer, we'd wager to say "Potion" marks the strongest possible start towards achieving that end. Check out the new single below.