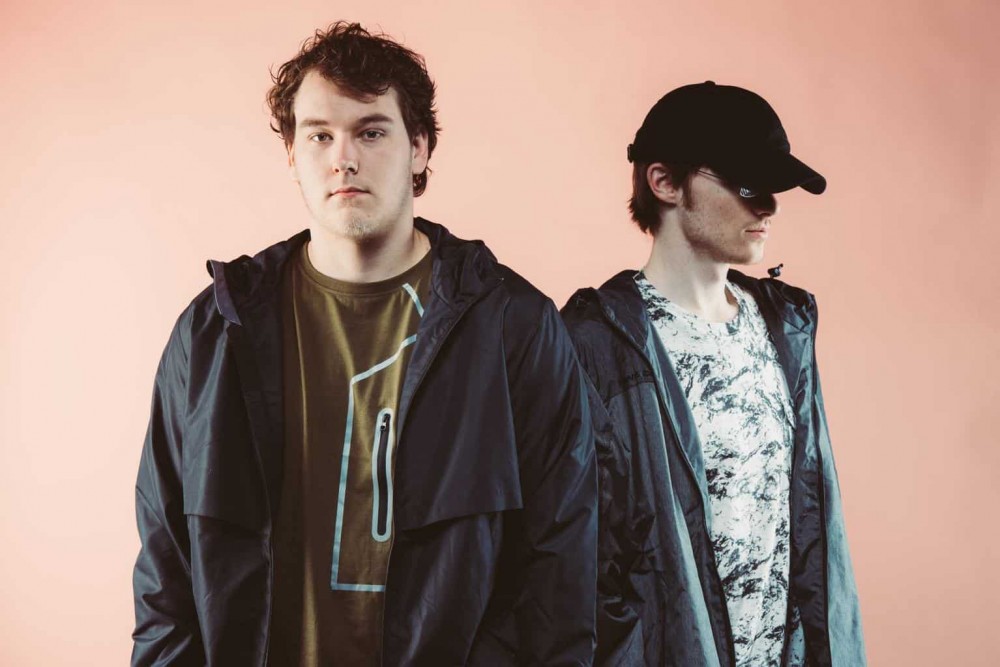 Crystal Skies are well on their way to doing big things and have been absolutely soaring to the top ranks the electronic music scene over the years. Signed to Seven Lions owned label Ophelia Records and recently dropping their brand new ‘Constellations' . There is no doubt that this duo is creating an inherently unique path for themselves. Known for their melodic bass-driven tracks like February's “Never Change” and “Fluorescent Light” featuring KARRA, Crystal Skies is an American electronic duo who’ve developed an ear-catching dubstep sound that is both heavy and emotional.

About a month ago I had the honor sitting down with both members the project, Louisiana-native Britian Holcomb and Aaron Dawson Philadelphia. The interview took place right after their epic set at the Ophelia showcase in Brooklyn, NY. We went over a number things regarding everything from new music, being signed to Ophelia, touring and much more. They went into depth on every topic and shared some interesting tidbits that you might enjoy!

– What did you think your set? How was the feel the crowd?

“The crowd was awesome. Yeah, they were really energetic from the very beginning and it seemed to really fill out. It was pretty full by the time we started and continued to fill up as the set went on. That's also the thing about Ophelia, they have some really dedicated fans and they always show up, was a really wild crowd.”

– When was the last time you played in NYC?

“Ezoo, this past September, and yeah that was crazy. We played at the Ophelia stage on Sunday the third day the festival. Everything was sick, the stage was awesome. We played a little earlier around 3 or 4 but there were still a lot people in attendance, so much fun.”

– So going more into Ophelia, how do you guys like being signed to the label?

“They're incredible, there's a big family vibe with everybody which is really cool. We've also all known each other for years, we all love hanging out at these shows and having a good time. It's really fun to be a part the label and it's also cool because we've been following all these artists for a really long time before we even started this project.”

– And how long have you guys been producing?

– Who was the first person you contacted from the label? How did your connection with them initially come about?

“Seven Lions contacted us for a remix on the song ‘Calling You Home' and that's kind how it got started. That's how we were able to get to know him and the label and yeah it was cool, he's been so supportive since and we can't ask for more than that.”

– Were you guys fans Seven Lions before you made that first connection with him?

“Aaron] Oh yeah 100%, he was probably one my favorite artists back in the day before I even got into production. We've been following him for a long time, super surreal to be working with him now.”

– Going into the ‘Constellations' EP, how did that come about? Was everything relatively smooth with it? And how long has the project been in the works?

“We actually worked on it for a solid year, yeah it took longer than we expected and definitely wasn't smooth in the way you would expect or want. But I think it's definitely our most solid work to date and it's something we would say we're most proud at this point. I find it interesting cause there's a track like ‘Feels Right' that we've worked on for over a year and then another track like ‘One More Night' which only took like a week to make.”

– How long on average does it take you guys to finish a song?

“Depends on the tune because sometimes it'll just flow and come together just really quickly and sometimes it's a little more drawn out.”

– Which track is your favorite from the new EP? Which one really ended up resonating with you?

“Britian] My favorite is ‘One More Night' I just think it's a really fun track overall. Aaron] I like ‘Release Me', I mean I like them all, but ‘Release Me' really stands out to me. Obviously we got to work with some great vocalists and I have nothing but good things to say about all them, but Gallie is definitely one my favorite vocalists that we've ever worked with. Her vocals on that tune in particular I really, really like. I think her vocals definitely helped to bring that whole track together.”

– Yeah, you guys seemed to have a lot talented artists involved with the project. Were most those collabs spontaneous or were they planned? Did you guys reach out to all them yourselves?

“With Gallie, we had a relationship with her before with some other projects we've worked on that never got released. I think with another vocalist we worked with, RUNN, we remixed ‘Calling You Home' and that's how we initially started talking. Then with Satellite Empire, we've been friends with them for years.”

– Where did the inspiration mainly come from for the EP? What were you trying to portray with the project?

“We wanted to put out something unique and different, that's really how we approached it from the start. We also focused on recording real instruments first and then adding electronic stuff after, which is kind something we've never done before.”

– What instruments do you guys play?

“Britian] I can play guitar and drums, he Aaron] plays the trumpet. Aaron] Yeah, the trumpet is the greatest instrument but actually my wife plays the trombone so I would have to say that's the best.”

“Aaron] I generally try to draw inspiration from a lot different areas. I think mainly I played a lot jazz throughout high school and college so, you know, I do draw some inspiration from that. Although I don't probably put it all into our music currently but it definitely inspires me, and yeah I've been kind getting into cinematic music and sort composing music in that kind style, I think that really fits well with electronic music.”

– So you're also going on tour soon and doing some shows throughout the winter. Is there one specifically that you're looking forward to the most?

“Britian] Yeah I'm just excited to be going on tour. This is the first ficial tour we're doing. Aaron] We've opened for Jeff during the ‘Journey Tour' last fall but it wasn't like a full-on tour so this will really be the first one and I'm especially looking forward to the Minneapolis show being that I have family from Minneapolis, it'll be the first time I actually play there.”

– Anything else you guys would like to touch upon regarding what you have coming up in the near future?

“Well we're thinking about probably, for the second half this year, putting out an and if we can we'd like to take a week and go somewhere isolated and just write down some ideas with a guitar and try to put something together that's really cohesive and a little bit longer than what we've done previously. We've only done two EPs at this point so making an album would be really cool.”

Such a pleasure sitting down with this fast-rising duo. Some really cool guys who are extremely talented and are definitely ready to make a firm imprint on the EDM landscape. Be sure to look out for new music from them soon and also catch them on tour! In the meantime, check out their recently released ‘Constellations' EP below!