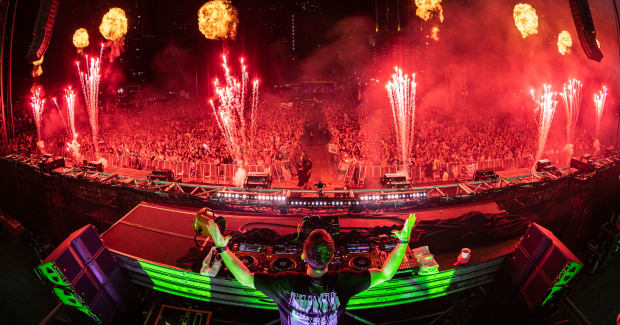 Having dominated the festival's stages for the better half of a decade, it's tough to believe we're just now hearing Hardwell's first-ever "Friendship Mix" for Tomorrowland.

And he pulled no punches. Fresh off his return from a four-year hiatus, the iconic Dutch DJ met the moment, dropping a relentless blend of never-before-heard edits and music from his long-awaited comeback album, REBELS NEVER DIE.

The mix doesn't just bleed techno—it hemorrhages it. After coining his new direction "Bigroom Techno" in a recent Reddit AMA, Hardwell twisted a knife into the sound for nearly an hour. Fans can hear it in ebb and flow throughout the mix, like in his thumping rework of Skrillex and J Balvin's "In Da Getto."

Other brand new tracks include edits of "Domino" by Oxia and "Pills" by Will Sparks and ShortRound. Hardwell also included his revamped version of "Spaceman," which is now available to download via the Revealed Family House Discord community.

You can listen to the mix below ahead of Hardwell's historic comeback on the famed Tomorrowland Mainstage during the festival's first and second weekends (July 15th and 29th).