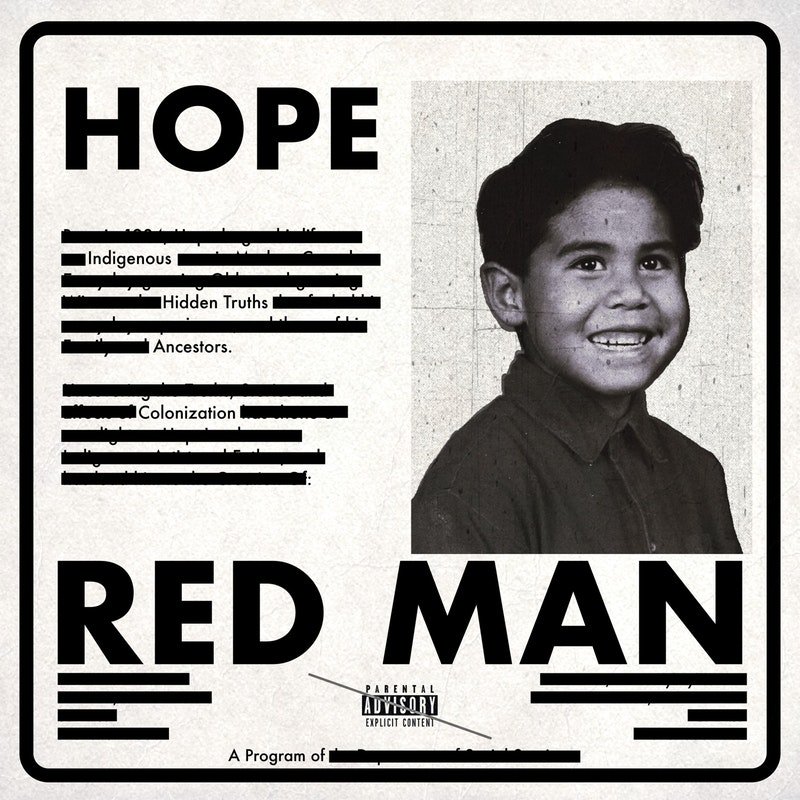 Hip hop newcomer Hope’s bio names his First Nation British Columbian tribe, the Leq’a:mel, in the very first sentence, so it’s only fair that we do the same. Between his album title, the album cover which shows a childhood image Hope with redacted text that presumably used to contain his people’s history, it’s clear this artist wants to make it perfectly clear what he came to the scene to do: bring back that redacted history and own it.

The Leq’a:mel tribe is part a group First Nation Peoples called the Sto:lo or Tahtlan. Their territory now covers a small part what is now British Columbia but, as is almost always the case with aboriginal peoples in North America, originally it was much larger. To Hope, this information isn’t only important for declaring that his people exist but it’s also a baseline for him to start discussing the experience living as a part this people: the erased history, the trauma experienced by his ancestors and the current trauma his community still suffers, living as a displaced people on land that was originally theirs.

In the title track  Red Man, Hope discusses the feelings and experience living that life from all levels, from the practical to the esoteric, and he makes the audience feel it. The trippy hip hop beat accompanies these extremely visceral lyrics that hope spits with crystal clear diction and a vocal meter that ensures the listener hears every word. This is the anti-mumble rap on every possible level.

The video for the “Red Man”single is just as visceral, opening with a written shot the vocal sample in the track from an old news story that describes the plight the Tahtlan in a way that is at best ironic and at worst, fensively wrong-handed. The video itself goes right along with the lyrics, depicting Hope walking through his ancestral land in native skins yet somehow looking like he feels out place. Halfway through, the video flips along with the lyrics and begins to depict more people in traditional dress and moving from surreal shots to more hyperreal as Hope talks about finding himself in the land and realizing the importance reclaiming that heritage, that land and even, in the end, the term “Red Man.”

While the whole album is powerful and geared towards telling his home truths and educating the public about his people, it’s quite diverse musically and subject-wise. In places, it’s even quite fun and dance-heavy. The second single f Red Man is just as expertly rapped with a beat halfway between hip hop and trap and it’s decidedly fun. The lyrics are about the empowerment Hope found in going back to his roots as well as in rapping and hip hop. The video also has a party vibe, showing Hope much more relaxed and happy with a child (possibly his daughter) and a cat, chilling and having fun. In this single, while Hope still has no intention straying away from his message, it seems he’s saying that he and everyone who hears his message are invited to celebrate the Sto:lo.

The complexity sentiment in Red Man mirrors the complexity the issue surrounding Native Peoples all over the continent. Hope put forth this struggle on an unprecedented personal level, speaking not only about his people but about his own search for a place in the world. While he doesn’t plan to forget, it’s obvious from this album that he’s done a great deal healing and intends to pass that gift on to his tribe, his family and to anyone who listens to his music. Just as with his ancestors, telling a story through a beat is powerful and healing on many levels, but most importantly it gives one Hope.

Red Man is out now on Hope’s Ruedgang Entertainment imprint and can be streamed or purchased on multiple platforms by clicking here.