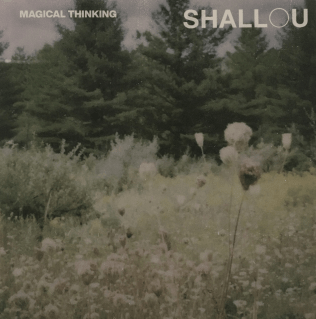 Talented music maker, Shallou, has his new debut album Magical Thinking on Island Records. His new masterpiece contains some his recent singles such as “Forget, “Fading,” “Older,” and “Mutual Love.” In addition, it features talented artists such as Ashe, Daya, The Knocks, Zachary Knowles, Vancouver Sleep Clinic, and Erika Sirola.

Shallou is known for creating ambient electronic music that will undoubtedly take you on an unimaginable yet otherworldly journey. Each track that he has released contains its own unique story waiting to be told. Each song on Magical Thinking does exactly the same thing. If you are looking to listen to something that will indulge you in your feelings, then you have to check out this album. There is a beautiful yet seriously magical sadness that is brought about from this music.

The first track the album is “Forget.” Since its single release, it has undoubtedly been one my favorite songs. It features the modified vocals Shallou himself. It sounds intensely magical and brings about a subtle form euphoria. “Mutual Love” creates a similar feeling. Featuring the soothing vocals Zachary Knowles, this track is a smooth yet slightly bouncy sound that will have you on an emotional roller coaster. There are times when you just want to dance and jump all over the place and times when you just want to be consumed by your thoughts.

“Silhouettes” features the angelic vocals Vancouver Sleep Clinic. I consider this one to be one the most powerful songs on the album. Within the first few moments listening, you are filled with pure bliss and what feels like magic. This continues throughout the entirety the song. Afterward, “Try – interlude,” as you can tell by the name, is a 43-second interlude that is meant to capture your attention and shake you into reality.

“Lethologica” is certainly the track that will sulk you in your emotions. It compels you to listen to its ambient sounds and recognize some feelings that you may be holding inside. Along with his gradual and sullen vocals, Shallou has created a track that will have you thinking while listening to it. These kinds tracks are seriously the best; it is a perfect example music speaking to you. “Technicolor Wave” is similar to “Lethologica;” however, it feels like it can be a potential anthem. The sounds and Erika Sirola's vocals give you the urge to sing at the top your lungs until you can't anymore. The powerful melody makes it hard to resist listening to it.

“Make Believe,” once again, features Shallou's fantastic vocals. This track is one that you can seriously vibe to, especially while you are stuck at home. If you are looking for a song that will take you away from reality for a little while, then you should listen to this one! If not, then “Fading” may be the next best. This track was Shallou's first single release from the album. Even after some time has passed since it was shared with the world, it is still wonderful to listen to throughout its entirety.

“Endless” features the wonderful vocals The Knocks. This vocalist is known to create amazing songs that can win anyone over. When you combine them with Shallou's sound, then you already know you will be hooked. Ready to dance around your room during this quarantine? Then you must certainly put on this track. However, if you are looking to have your emotions, once again, impacted, then “Older” may be a better choice. This track features Daya's compelling vocals, which make it perfect for this sullen tune.

“Good Thinking” is also one my favorites from the album. It is a beautiful duet by Ashe that speaks to you. The lyrics have some power to them, making you eager to closely pay attention to what is being said. Truly, it is intensely heartbreaking when you actually listen to it, and that just makes the song even more powerful. It is about an ex-lover, unfortunately, in the arms another, leading you to ponder on the memories you had together. Ultimately, when you combine the lyrics with Shallou's incredible sound, you are instantly hooked.

Finally, “Magical Thinking” starts f with a beautiful monologue that makes it the perfect track to end this album. It eventually transitions into a nostalgic and robust sound that is will surely wow you. Once it comes to its end, you will be dying for more music by Shallou. You will undeniably want to hear the entire album once again.

Shallou has definitely done a phenomenal job in bringing fans a beautiful work art. If you have yet to listen to his music, then make sure to check this album out. Get ready to jump on this emotional roller coaster because you may never want to get f. You will not regret it!