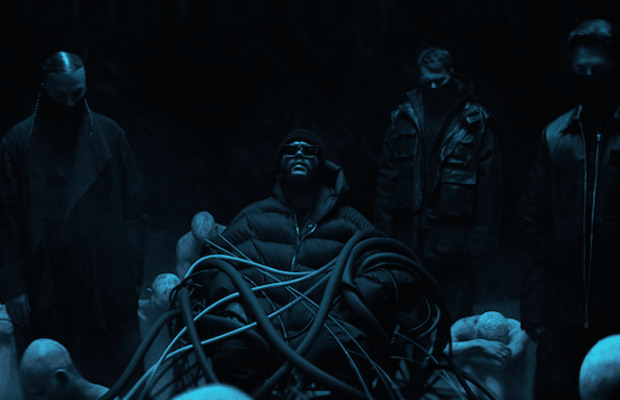 Well that's one way to promote a tour.

Swedish House Mafia have released their long-awaited collaboration with The Weeknd, a sultry single called "Moth To A Flame." The drop aligns with an announcement by the iconic dance music trio of a massive 44-date tour, their first in 10 years.

The track arrives ahead of the group's upcoming full-length album Paradise Again, which is slated for release in early 2022. Check out the official "Moth To A Flame" music video, directed by Alexander Wessely, below.

In a new interview with Zane Lowe on Apple Music 1, Sebastian Ingrosso, Steve Angello, and Axwell of Swedish House Mafia opened up about working with The Weeknd. One of the world's most successful recording artists, the three-time Grammy winner has long championed electronic music, collaborating with Daft Punk, Gesaffelstein, and Kavinsky, among others.

"We love [The Weeknd] as an artist and we love what he stands for visually, artistically," Angello said. "And that's the kind of guys you want to work with because we've done this for quite some time and we learned throughout the years, so passion is going to win."

"When you hear [The Weeknd], it's a blessing," Angello added. "It's not that hard to hear what you need to do because he's so dynamic the way he expresses himself in a song. It kind of just happened. It's like magic. You go to the studio and just try to figure it out. And it just happens. It's hard to explain."

The creative process and final result of "Moth To A Flame" were so rewarding that Ingrosso admitted he became emotional.

"It doesn't happen with every song. But when it does, that's like a mind fudge, like a war zone," Ingrosso said. "You're like, I'm crying to a song somebody else made it, but actually it's us who made it. It's unreal. It's an unreal feeling when you can connect with your own song, even though you heard it 10,000 times during the process, you should be tired of it. If it still gives you those emotions after 10,000 times. Then maybe it's good."

Prior to the tour announcement, the trio had teased performances via cryptic billboards in Las Vegas, New York City, London, and other major cities, fueling speculation of a global tour. And just one day after confirming a ballyhooed performance at Coachella, the expansive run of tour dates is now official.

Tickets will go on sale to the general public next Friday, October 29th at 10AM local time. To gain exclusive pre-sale access, fans can pre-order a special edition Paradise Again CD via the group's official store before 12PM ET (9AM PT) on Tuesday, October 26th.

Check out the full list of Swedish House Mafia's 2022 tour dates below.