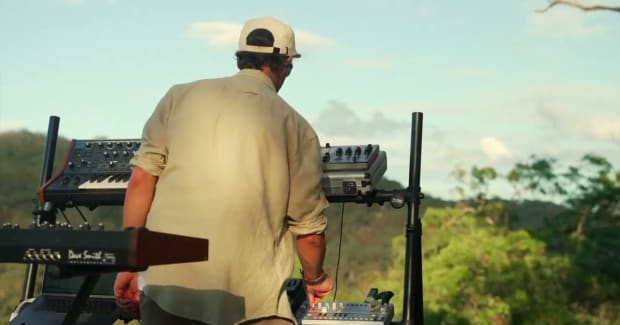 The dinosaurs of Jurassic Park are stomping to a new rhythm.

Performing under his Little Foot alias, the Australian DJ and dance music producer set up shop in a lush valley deep in the land down under to perform the track live. Originally written by legendary composer John Williams, the theme's grandiose orchestral strings aptly continue to capture the power of the larger-than-life creatures that captivate viewers to this day.

With his remix, Little Foot creates a similar sense of scale with long-form builds and breakdowns that stay true to the instantly recognizable progression of the original. He creates a measured evolutionary shift in the filter's cutoff modulation that seeks to turn the track into a hit fit for the dancefloor with a satisfying payoff. As the camera soars over the vast, green landscape soundtracked to the song's arpeggiated rhythms, one can't help but envision the magnificence of Steven Spielberg's fantastical creatures gracing the big screen.

You can check out the performance below and stream Little Foot's rendition of the Jurassic Park theme music here.