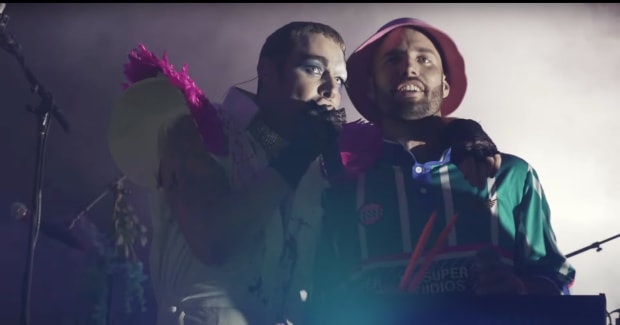 Former Silverchair frontman Daniel Johns has returned with his second solo album, and he's brought frequent collaborator What So Not along for the ride.

According to the Australian electronic music producer, their new single "Stand 'Em Up," which appears on Johns' FutureNever album, actually marks the first of multiple new tracks soon to come from the duo. What So Not teased the arrival of the single earlier this week while noting that their forthcoming collaborative project will mark his first creative venture outside the scope of dance music.

"I’ve started a new project," What So Not wrote on Instagram. "For the first time in my career, I’m releasing something that is NOT dance music. It’s with a dear friend of mine, Daniel Johns, and you’ll hear the first of it this week."

The two Australian creatives have demonstrated artistic synergy with past releases "Be OK Again" and "If You Only Knew" alongside San Holo. With FutureNever, Johns admits he set out to achieve something completely different compared to what fans might otherwise expect.

"As an artist, I find myself getting bored quickly, so with this album, I wanted to deliver an exciting record that feels like an adventure for the listener," he said in a statement. "I’ve stopped running from my past—I am here, I’m embracing it."

On "Stand 'Em Up," Johns and What So Not come in hot. With a rugged twang in his voice, Johns declares war as riveting dirty drum fills and grungy guitar riffs dominate the mix. The incendiary single continues with Johns bellowing "Stand 'em up against the wall" as the call to arms swirls in a gritty concoction of vocal soundscapes, hammering drums and distorted riffs.

Elsewhere on FutureNever, Johns dabbles with flavors of R&B, downtempo pop and acoustic-heavy cuts in what he calls one of his bravest efforts. "FutureNever is me at my best and bravest. I want to share a world that invites repeat listens and encourages discussion and analysis," he says.

At the time of writing, What So Not hasn't yet shared further details on when fans can expect more music from the upcoming collaborative project.