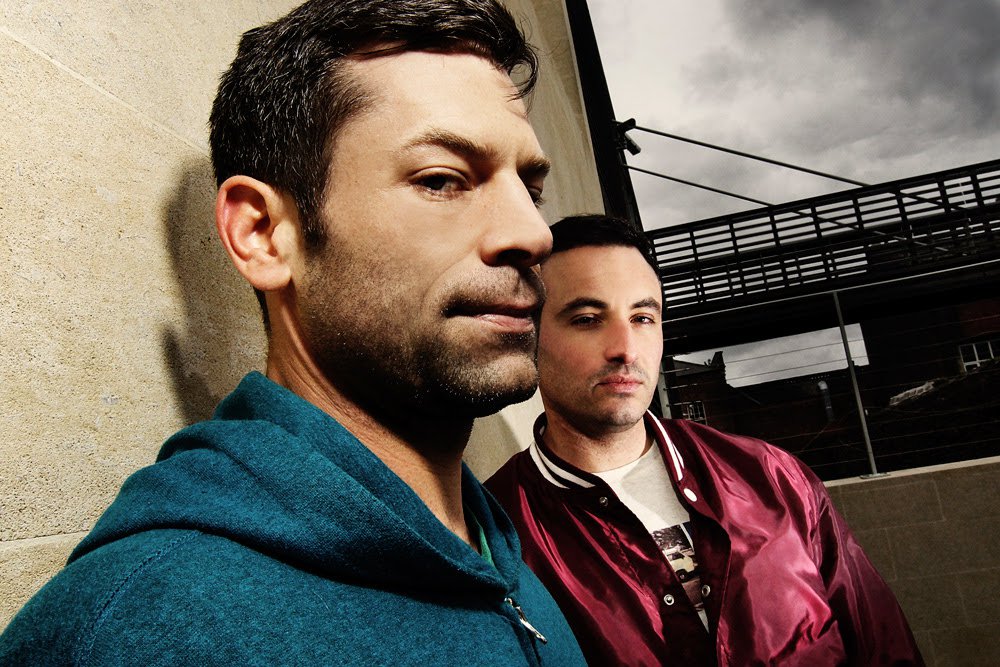 In a rave career that collectively spans almost 30 years, it’s natural for artists like Freshold and Renzo (the members Insomniax) to want to look back and reminisce and also to take inspiration from those rave glory days. That’s just what Insomniax have done with their two-part EP series, V7 Saxon Street, the first part which released in late March. The EP’s title is the literal address legendary club Sanctuary in Milton Keynes north London, from which the duo clearly take a lot inspo both for the EP and in their music in general.

In a genre whose focus seems to be relentlessly on pushing forward, creating new vibes and daring the laws sound design physics to blink, Insomniax are and have been on that leading edge, creating new vibes and keeping said vibes super clean with no small amount humor, groove and cheek. They’ve played with every sound imaginable from liquid to dark to techy “Foghorn” vibes. That said, however, the Insomniax “Origin Story” seems to go back to those early days in the 90s and early 00s where the leading edge jungle and DnB sound was created not in the studio but on the dancefloor.

It’s easy enough to hear and feel the vibes in the tracks  V7 Saxon Street but to get the true experience and the love the UK rave scene and Inxomniax themselves have for said vibes, Ollie Freshold decided to put together a banger a playlist: 21 the tracks he feels were at the core the Sanctuary vibe and which still inspire the Insomniax sound today. It is a gift, this collection, and Your EDM are proud to pass it on to the ravers today. Listen and love.

One my all time favorite DnB tracks. It’s so way ahead its time it still sounds fresh today. Whilst many other jungle/DnB producers were sampling hip hop and reggae etc these guys were fusing jungle with sci-fi samples. Absolute classic!

Aphrodite – My Style (from the Dark Side)

Again another track 20 years ahead its time. Everyone was rinsing this around this time.

A timeless classic and a pivotal moment in drum and bass. I don’t know if my vinyl this ever left my record box.

Another vinyl that never left my box. To this day this is still one the most inspirational drum and bass tracks to me. So simple! “So both sides begin a new quest for peace”

If you don’t know this tune then get to know.  An absolute amen monster ! I Might start dropping this one in the sets again.

I’m pretty sure a lot non DnB jungle heads know this one. Huge anthem and an absolutely beautiful piece music. One for the back row head-nodders.

Back in the day when we didn’t have internet we had to search out records. Sometimes you would never find find out what they were. It took me 2 years to find this after hearing it played out and on the tape packs. Well worth the wait.

The first time I attended a rave at the sanctuary in 1996 I’d say 90% the Dj’s on the night started with this. IMO One the biggest drum and bass records ever.

I’ve just actually just downloaded the new master this through DJ Zincs website. Definitely my favourite Zinc track. I recently read that he sampled the bass from a really old Marcus Intalex song from the early 90s.

It’s a shame Hype stopped producing all those years ago because his tracks were so good. This was an anthem for a good few years back in the sanctuary days.

The Full cycle crew always had the knack for writhing the most simple but catchy records. This is no exception. I fell in love with this the first time I ever heard it which was during Ray Keith’s set at a Helter Skelter event in 1998.

RIP Trend. My memories this track is standing in the queue outside the sanctuary eagerly waiting to get in and hearing this blast out the doors the Rollers arena and everyone in the queue bobbing around outside to it. Huge huge anthem back in the day.

A cool fact I learned the other day is that DD Die took inspiration from DJ Zinc’s “Reach out” and went on to write this. Definitely in my top 10 all time favorite DnB tracks.

The fact that 23 years later this still absolutely guarantees to murder the place down,  proves what a classic it is. Still sounds fresh now and everyone still loves hearing this, and Dj’s still love dropping it !

Another huge Jungle/DnB anthem. Longest intro ever though. I remember the MCs calling rewind and us lot shouting “no don’t do it” because the intro was sooo long. This has had countless amounts remixes over the years but the original is still by far the best version.

Back in 96 this is what we used to call Jump up. Rarely would you hear a set back then without this in it. Classic Bristol sound !

Absolute game changer ! I remember hearing this for the first time also at sanctuary when Nicky Blackmarket dropped it. I was stood next to a crew fully moschino’d up Rude-boys who all lost their shit to it.

This had just had a re-lick from modern day Jungle don Serum. I feel he definitely did it justice but you can’t beat this Version.

Shout to DJ SS and formation records. One the longest standing Djs and Labels in Drum and bass.

I Got to 20 tracks on this list and then remembered Shadow Boxing and couldn’t possibly leave it out. For me it’s the most simple but emotional piece Drum and bass ever written. I remember first hearing it at Sanctuary and literally everyone playing it that night. If you looked around everyone just had utter screw face ! When I think dark drum and bass, I think Shadow Boxing.

V7 Saxon Street Part 1 is out now and available on Beatport to purchase or Spotify to stream. Stay tuned for part 2, out shortly.