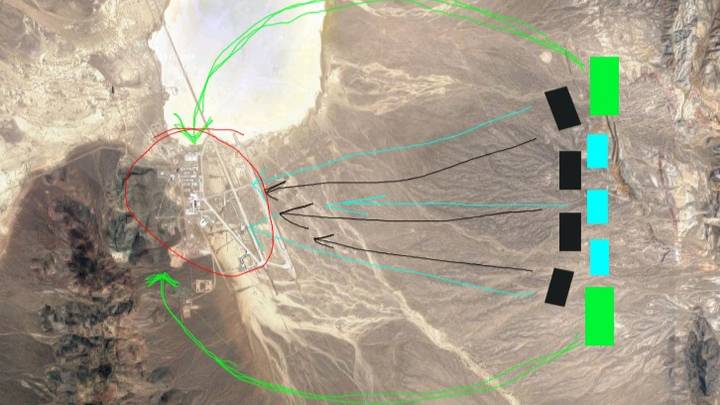 Founder Storm Area 51 and the AlienStock Festival, Matty Roberts, has ficially cut ties with the festival after a series issues concerning safety have made him nervous about the event.

Roberts said he visited the town Rachel over the weekend and discovered that the infrastructure simply did not exist to support the number people planning to attend “AlienStock” — an event he never intended to become so big. He handed over event production and planning duties to others, as he has no experience throwing events any size, and those individuals, including Connie West, a resident Rachel, NV, apparently did not meet their obligations.

According to 13 Action News, West claims the event is still happening. Investigative reporter Joe Bartels was able to independently verify that “West has made arrangements for sanitation, security and medical for the Alien Stock Event. West also says that stages are in the process being built and she has lined up 20 bands and 2 comedians. She also told 13 Action News that she will be announcing the entertainment lineup soon.”

AlienStock isn’t the only event planned near Area 51 on Sept. 20. The Area 52 basecamp in Hiko, Nevada — about a 45-minute drive from Rachel — is also planning on hosting events.

Due to the lack infrastructure, poor planning, risk management and blatant disregard for the safety the expected 10,000+ AlienStock attendees, we decided to pull the plug on the festival. The permit holder (Connie West) was given multiple opportunities to provide us with the pro that things expected at this festival were in place. In fact, she refused to provide to us, as agreed upon, contracts, pro deposits or any paper pro anything.

We are ficially disconnecting from Connie West, Rachel NV and AlienStocks affiliation with them. We will no longer fer our logo, social media, website or Matty Roberts likeness or scheduled appearance. In short, the relationship has ended permanently, and AlienStock will be moving to a safe, clean secure area in Downtown Las Vegas as an alternative.

We are not interested in, nor will we tolerate any involvement in a FYREFEST 2.0. We foresee a possible humanitarian disaster in the works, and we can’t participate in any capacity at this point.

AlienStock is a brand that stands for unity and concern for like minded people. It’s grown into much more than a location. It’s a phenomenon that can only promise absolute safety and peace, and we need to move the Festival to guarantee that. Stay tuned for more news… it’s BIG!