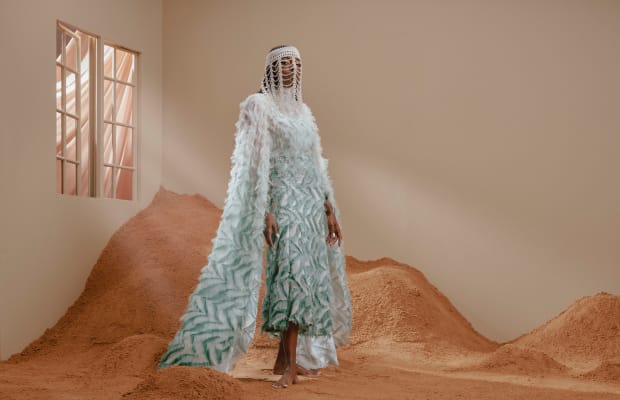 It's no secret that the current generation of young music producers is about as creative as they come. From the endless libraries of music available online to the fast-paced evolution of music-making technology, their artistries have been catalyzed by unprecedented access to education and inspiration.

It's hard to even choose a standout track off Lucid Dreams, as its lyrical storytelling shifts so adeptly between moods and messaging. Still, it remains expertly cohesive, as Jeanz weaves together synth-based instrumentals with vocal-driven ear-pleasers.

There's the brightly bursting sonics of project opener "Overwhelmed," which contrast brilliantly against the sultry pensiveness of "All Of Me" (with Jordan Baker). Or there's the progressive R&B of "We Move" (with AliThatDude), which flows seamlessly into the amapiano house sounds on "Amagroove."

"When it comes to my own projects I use my personal stories as a foundation for the tracks I produce," Gina Jeanz explained. "Music is an outlet that has always allowed me to 'journal' and document my everyday life experiences."

Check out Jeanz's exclusive track-by-track commentary on her debut album, which she called a "lifetime goal" on social media, below.

1. "Overstimulated": "'Overstimulated' sets the foundation of the album. It’s the opening track and the very first one I produced. I wanted to interpret my state of mind, the calm before the storm, what it felt like during my periods of anxiety I had experienced prior to creating the album, coupled with my craft and being able to create suspense of what is to come. I channeled all that energy into sound."

2. "Sun Spot" (with Sio): "The contrast between the title 'Sun Spot' and Sio’s writing on this track is where light meets the dark. The story behind the song is of a tumultuous relationship, where being stuck in arguments and misunderstanding becomes the default, and although not ideal, and even frustrating at times, there is still that hope possibly of resolve.

3. "After Hours" (with Brad Knight): "'After Hours' speaks to letting go of all inhibitions, getting lost in the essence of the one you’re with, completely intoxicated by their being and having no expectations beyond just living in that moment and feeling like we are our truest selves after dark, no inhibitions and no judgement."

4. "Can’t Pretend" (with Moonga K): "'Can’t Pretend' is inspired by that willingness to commit and let go of playing games—the idea that one should have to hold back at admitting how much they're ready to dive into it all and just completely give into love."

5. "All of Me" (with Jordan Baker): "'All Of Me' is about falling into patterns of unrequited love and lack of communication, and breaking down walls and being patient to understand your partner. Even though one is willing to love unconditionally, there is that yearning to feel loved in return."

6. "We Move" (with AliThatDude): "This track was inspired by summer love in foreign locations. For some reason you’re just a little more confident to move onto someone you fancy in places no one knows you. The spirit of the track is carried with Ali’s infectious delivery both singing and rapping on the track. He was the perfect fit and, also being Namibian, I really wanted to showcase how, although from different backgrounds in music, I think we both had the same goal in mind executing this track."

7. "Amagroove": "As a Namibian living in South Africa for over 10 years, I’ve been influenced by the electronic music scene. Amapiano took over and in my own special way I wanted to pay homage to SA and how much I’ve grown into my music while living here. Amagroove is the perfect blend between house and amapiano but with my own unique spin on it."

8. "Dopamine" (with Moonga K): "'Dopamine' simply celebrates life and having your 'levels' stable enough to feel like yourself again. Everyone who’s had anxiety can relate to having a lack of dopamine. Moonga and I shared similar stories and it was a no-brainer to stick to the title of the song and make something beautiful and positive out of it."

9. "100ml": "This track was inspired by the positive effects that CBD oil (without THC) had on my overall mental health. I was able to get through my days without anxiety attacks and spent most of my recovery days elated and found joy in creating again. This is a purely and heightened track that I went full-on with production allowing it to just be with no expectations other than to have fun creating it."