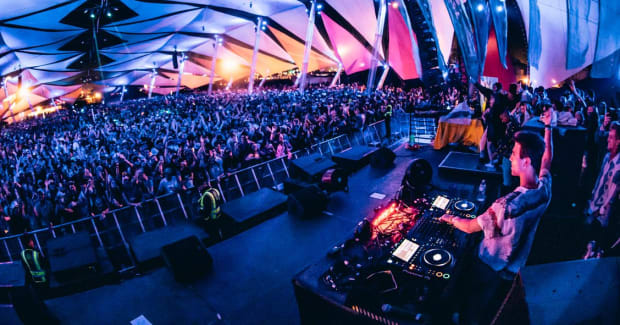 SG Lewis was the talk of the town last week after a surprise three-hour DJ set at Coachella's Do LaB on April 16th. An experimental mix of house, disco and techno, the performance proved an electrifying demonstration of his selector savvy.

It was one of those experiences you just had to be there for—and now you practically can, thanks to Lewis' decision to release the full recording. In it you'll hear a diverse range of tracks, from Oxia's "Domino" (one of the influences on his debut album, times) to StoneBridge's "Put 'Em High" (with Therese). Lewis also sprinkled in his own music, including "Impact" (with Robyn and Channel Tres) and a euphorically melodic rework of "Chemicals."

Curated by the creators of Lightning in a Bottle, which Lewis will be playing this summer, Do LaB also featured appearances by the likes of Diplo, Subtronics, Chloé Caillet and even Rebecca Black with Big Freedia during the festival's first weekend.

"The three-hour set at the Do LaB was probably my favourite experience DJing to date," Lewis gushed in a press statement. "The extended slot allowed me time to really dive into genres that inspire my own music, and to build slowly in energy over time. I was hesitant to upload the set, as it felt like one of those moments where you had to be there—but listening back to it brings about so many great memories, and so many of you asked so nicely for it."

"I’ve never received so many messages about a DJ set before," he continued, "so thanks to everyone for the lovely words. Chopped off the first 15 minutes due to an audio issue, but it took me that long to settle in anyway. Hope this recording brings back some great memories to a lot of you too."

Listen to Lewis close down Do LaB below.