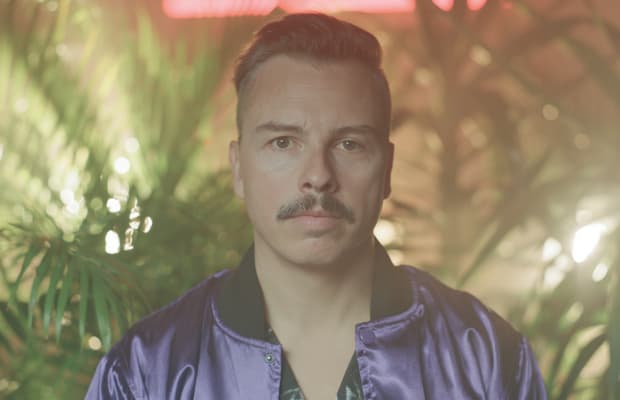 One listen through his new EXOTICA LP, which dropped in full today, is all it takes to know that the German electronic music superstar is in a league of his own. And after recently eclipsing the billon-stream milestone, it's scary to think of the heights he'll ascend to on the wings of his scintillating new album.

Anthems galore, EXOTICA is a disco lover's dream and a nostalgic rush of foot-tapping gaiety. Inspired by the sultry sounds of Prince and the gritty funk of Jamiroquai, among other legendary artists, Purple Disco Machine flexes his encyclopedic knowledge of dance music throughout the record's 14 tracks.

In celebration of his sophomore album, the house music virtuoso has broken it down track-by-track for EDM.com. In his own words:

The song was one of the first to be created during a studio session with Lorenz Rhode at the end of 2018. I wanted an intro song that would put the listener in the right mood for the album. Originally planned as instrumental, I decided to work with Sharah for the track. It was definitely the right decision.

"At The Disko" is another song I wrote with Lorenz. It's the perfect symbiosis of the typical PDM club sound, the more poppy sound and a little French touch.

"Fireworks" is something I've been working on for almost six years. In 2018 at a gig in NYC I met The Knocks and they had the idea to record a kids choir. That gave the song a completely new direction. In the end we brought Moss Kena onboard for the verses and the song was finished, which cost me so many sleepless nights.

Don't stop is a typical PDM for to the floor song that I originally produced for my DJ sets. For many years I wanted to work with the original sample of Yarbrough & Peoples. The song also describes well the evolution of my sound over the last years.

"Dopamine" is one of the last songs I produced for the album. In the middle of the lockdown, Eyelar and I were sending stems back and forth trying to finish the song. Matt Johnson from Jamiroquai put the finishing touches on it and it was one of my favorites from the album.

I've been a Phil Collins fan since childhood and "In the Air Tonight" is one of my all-time favorites. I always wanted to do a ballad in the same style that builds dramatically and explodes at the end with lots of drums. I was able to get Derrick McKenzie, the drummer from Jamiroquai, to do that. With the voice of Elderbrook, the song was perfect.

With opposite of crazy I went into new territory. At 80 BPM, it's the slowest song I've ever produced. Yet I had so much fun working on it. I found Bloom Twins on Instagram and just contacted them. I found their voices totally exciting, and the song was perfect for the two of them.

"Hypnotized" was the first song I worked on for EXOTICA. It was summer 2018 and I had just bought a new vintage synth called Solton at auction and couldn't wait to work with it. The same day I uploaded "WIP" snipped on my social channels and the feedback was so positive that I immediately knew the song was special.

It had this perfect imperfection. I sent this instrumental to Sophie and two weeks later she sent "Hypnotized" back, and after the first 10 seconds I had goosebumps. There are always these moments when everything falls into place. And these moments are precious and should be appreciated.

"Loneliness" is a song that takes itself very back and gives time to catch breath. A song that lives from its simplicity. Influenced by artists like Patrick Cowley or Giorgio Moroder, it is another example of the evolution of my sound. With vocals by Francesca and guitars by CHI. It is the perfect song to dream to.

"Hands To The Sky" is a tribute to the house scene. I've known Fiorious for a few years from various Defected and Glitterbox shows and we've wanted to do a song together for a long time. We realized very quickly that musically we are surfing on the same wave. The Gospel House Choir round the whole thing off and make it a real house anthem.

"Money Money" is a tribute to Prince. Pink Flamingo Rhythm revenue was just the perfect collab for the song. From the first minute I loved the vibe of the song and had a lot of fun producing it. Again, CHI Thanh's guitar riffs make all the difference.

Playbox is 100% PDM. A song that like Bodyfunk or Dished was created as a mashup for my DJ sets. It has so much energy that I look forward to playing it live every weekend.

"Exotica" reflects my love for Italo Disco. A sound I grew up with in Germany. The song is completely analog produced, i.e. I tried to use the same synths that were used in many Italo Disco productions back then. It's one of my absolute favorite songs from the album.

When I heard Ed from the flights facilities for the first time, I was mega enthusiastic about his voice. He reminded me a bit of George Michael and his earlier works. With this mood I sat down to the song. I knew relatively quickly that this had to be the last song on the album. It is the perfect song to end the journey into my Exotica world. A song that gives you that "no matter what happens right now, everything will be alright again" feeling. And with that feeling I wanted to end my album.

You can stream EXOTICA here.